Do you know what germs lurk inside your keyboard?

Germs can exist in any office space. By following these common sense tips, you can help reduce the risk of contaminating your current or new office space. 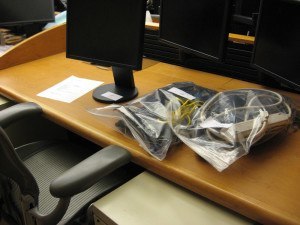 The average office has hundreds of times more bacteria than a toilet seat.

This finding is from one of America’s leading experts on work and home hygiene, Charles Gerba, a professor of microbiology at the University of Arizona.

Over the past two years, Gerba and his team have seen an improvement in overall office hygiene as desk wipes and hand cleaners become more popular.

However, in these summer months, with air conditioning units and ventilation shafts a good breeding ground for bacteria, there are a number of points experts want you to be aware of before you high-five a colleague at the office meeting:

First, wash: Washing your hands for 20 seconds under soap and running water is far better than a quick squirt of hand sanitizer at your desk, says Dean Cliver, a professor of food safety at the University of California.

While many hand sanitizers boast of anti-microbial properties, a scrub with ordinary soap is far better, Cliver said. Water penetrates much deeper helping to remove food debris and other particles that hand sanitizer just doesn’t reach.

Protect your face: Office workers touch their hands to their faces an average of 18 times an hour, according to Elizabeth Scott, a professor at the Simmons Center for Hygiene and Health in Boston.

When we touch our faces, we bring all the collected gunk of our keyboard, desktop or BlackBerry right to their respiratory and digestive system every 3 1/2 minutes. Bacteria and viruses couldn’t ask for a better transportation system.

Scott recommends washing hands regularly and, yes, using hand sanitizer, especially after shaking hands with a colleague suspected of having a cold or another illness. “As soon as I see someone come into my office that I think is sick, I immediately grab the sanitizer. You can shake hands at business meetings and still protect yourself,” she said.

Gerba, in contrast, politely declines a handshake if someone has a cold. “You could infect the whole office.  Any reasonable person will understand that,” he said.

Beware thy neighbor’s cubicle: Is your cubicle a pristine display cabinet, while your neighbor’s is a mounting pile of paper, uneaten food and sports socks? Those bacteria will multiply and crawl over that cubicle wall.

Gerba’s research found that two adjacent offices at one company had the biggest yeast contamination of dozens of offices sampled. The contamination simply spread from one to the other.

“It might be of interest to take note of your neighbor’s hygiene practices, so sharing of bacteria and yeast doesn’t occur,” he wrote in his report.

Clean out that keyboard: Shake an average office keyboard and you are likely to find what Gerba calls “the bagel shower” —- bits of bread particles and other food bites lodged between the keys.

Most office cleaning companies do not touch computers or keyboards because they don’t want to risk causing any damage. Hygiene is left to the employee, and many don’t bother.

Gerba recommends an alcohol-based sanitizer for cleaning the keyboard. Simply blowing compressed air over it is not going to remove bacteria clinging to the surface, he warned.

Perhaps the best combination is that used by Brendan Cahalan, a risk manager with Standard Motor Products in Long Island City in New York. He uses an alcohol-based cleaner on his computer, as well as compressed air to clean out any debris between the keys.

Dispose of unwanted food:  Don’t let food accumulate in your desk drawer, where it will provide a giant breeding ground for bacteria. According to Gerba, women bring healthier food to their desktop, such and bananas and fruit, which provide a boon for nutrient-hungry bacteria.

Gerba recommends the rapid disposal of any unwanted food; hassled employees often forget about food lodged at the back of desk drawers.

Scott comes to women’s defense on the food issue —- women often have cleaner desks than men so they will not allow the bacteria to build, she said.

Work like a lawyer: Gerba’s study of offices in New York, San Francisco and Tucson, Ariz., found that teachers’ offices had by far the highest levels of germs per square inch, nearly three times as much as bankers, the next most contaminated professionals. Lawyers had the least infection.

While lawyers have the advantage of having little contact with children, they are also good at sticking to a regimen, Gerba said.

One example is Colleen Kerwick, an aviation litigation attorney with the firm in Manhattan. She wraps up food remains and dumps them immediately. She was encouraged to do so after seeing a mouse’s head peer out of a wastebasket at a previous employer’s office.

“I do not use hand sanitizers or antibiotics, as I believe they weaken your immune system. However, I’m much more careful about office hygiene since my mouse sighting,” she said.

Think twice before using the fax machine: Gerba’s research in dozens of offices has found that the “enter” and “send” buttons on fax machines carry some of the highest concentrations of harmful microbes. In contrast, lesser-used keys have significantly less contamination.

Other commonly used surfaces with high contamination levels include the “copy” button on the office copier, and the handles of rest room doors.

And before you ask to work from home, consider that Gerba’s research has found much higher levels of contamination in home offices. Home workers are less likely to separate their private lives, he said.

“Children can be a major source of contamination, and home workers are much more likely to do things they would never dare attempt in a corporate office, such as put their feet on the desk,”

Now that you know about the, “bagel shower” in your keyboard and other places germs can lurk in your office – get moving!  Never a better time to clean than the present!